NO SELF: Eli Casiano and Colin Frangicetto

Campfire Gallery is pleased to present “No Self” an exhibition of new mixed-media paintings by Eli Casiano and Colin Frangicetto. No-self is a reference to the Buddhist teaching of Anatta and the doctrine that in sentient beings, there is no one permanent self. This is counter to most Western ideas of the soul and our need to define our identities around a single, permanent self that is the essence of who we are as individuals.

Eli Casiano and Colin Frangicetto explore themes of identity in their work by taking familiar cultural motifs and combining them in a completely new context. Both artists are pop surrealists in the true sense of the term whose work is primarily figurative in nature. Frangicetto’s portrait-style paintings depict human hybrids, spirit animals adorned with brightly colored flowers and a third eye, creating dream-like visuals that feel both familiar and otherworldly. Memories and iconic characters from film, TV and comics collide in a mélange of the hyper-commercialized and sentimental in Casiano’s canvases. The process of combining recognizable but disparate elements that have strong personal and cultural associations creates a surprising new narrative that allows the artist and the viewer to examine their own notions of self. 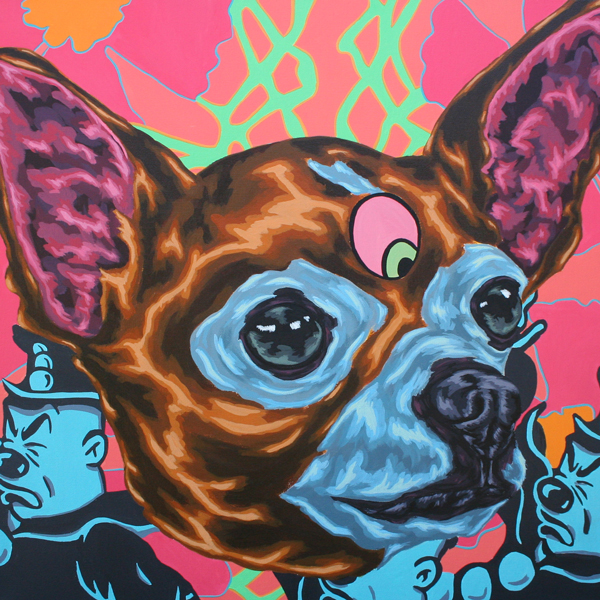 My work focuses on shifting cultural immersion between acculturation and marginalization. I explore the gradual disappearance of my heritage, as a third generation Mexican-American, through the manipulation of Tejano/American iconography. I explore loose memories from my childhood, along with imagery from films, comics, and television program to create ambiguous over-saturated narratives. By generating cultural symbols similar to mass produced, unlicensed merchandise sold in border towns and flea markets, I am recognizing my unconscious attempts at destroying an ethnic identity. By reconstructing iconography from American pop culture with Tejano influence, I am attempting cultural self-restoration.

About the artist: Originally from South Texas, Casiano currently lives and works in Oklahoma. He received his Bachelor of Fine Arts from East Central University, Oklahoma in 2013 and has participated in numerous regional group shows as well as student art festivals and publications. This is his first show in San Francisco. 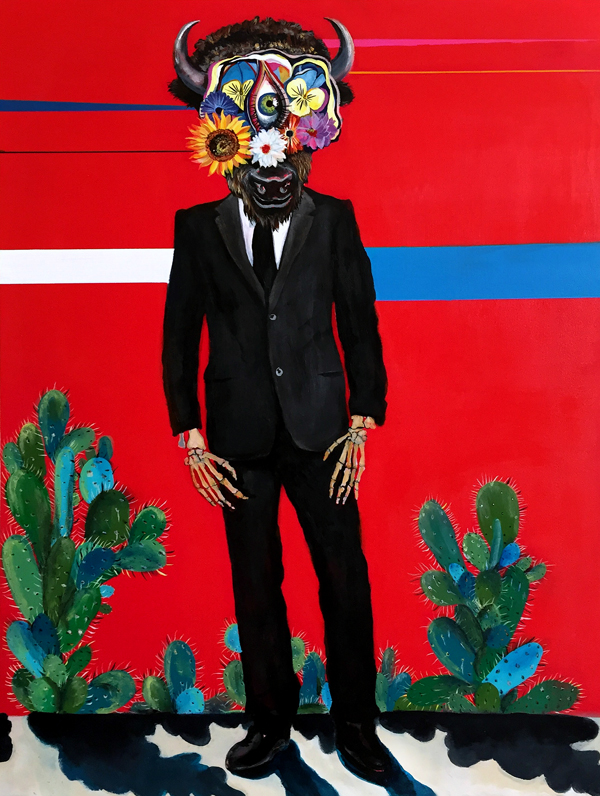 Making art is like dredging the proverbial lake of the subconscious. During the creative act I lose track of time, space and sense of self. It is not uncommon for me to sense something unknown or even alien when I gaze at my work after the trance of making it is over. In a state of disassociation I stare at my own work and internally question, “Who made this?”

Psychedelic explorers, shamanic priests, Buddhist monks and other visionaries speak about the annihilation of ego leading the mind to transcendental planes. While perceived happiness could not exist without our own concepts of self it would seem that we are most blissful when we have the ability to just “be” in a moment and as the saying goes, lose our selves inside of it.

Every picture is my own attempt to simultaneously lose and find my self over and over again.

About the artist: Originally from Bucks County, Pennsylvania, Colin Frangicetto is a professional musician and self-taught artist. He currently lives and works in San Jose, California and has exhibited work nationally since 2010.