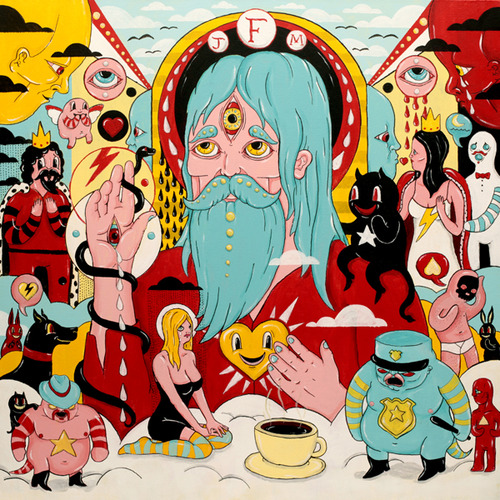 Campfire Gallery is pleased to present IN HEAVEN, a solo show featuring the work of Dimitri Drjuchin. In this new body of work, Drjuchin continues his mystical journey exploring the theme of heaven and earth that is both optimistic and questioning. Angels and super heroes co-mingle with strange colorful creatures that float and appear to travel through space and time. But there is an order and symmetry in this world that suggests a path to an elevated place or at least a new awareness.

Personal artwork is about self-discovery and evolution. The relationship with these images and the world I’ve been creating since I started drawing as a child speak to me in volumes.

There is a secret language between the artist and the art that is sometimes hard to put into words.  I use a lot of simple shapes and repeated themes in my work, namely pyramids, stars, hearts, skulls, angels, super heroes and animals. I enjoy playing with familiar shapes and themes and turning them into something of my own, tackling them and making them into something you wouldn’t expect.

Everyone has a relationship with these symbols and they can be rather cliché but the underlying idea is to leave a lot of negative space and keep the image simple.

I look back at my work from seven years ago and I see a lot of anger and frustration. It’s interesting to me to look upon the continuous stream of work I’ve produced since then and reflect on the personal story they reveal back to me. Now I look at this show and see a totally different person who has grown considerably from that age of an angry young man.

Dimitri Drjuchin is an artist/musician who was born in Moscow, but grew up making images and sounds in New York City. He graduated Parsons School Of Design in 2003 with a BFA in Illustration. This is his third solo show. Dimitri’s work is also “on tour” as the cover art for Father John Misty’s new album Fear Fun.