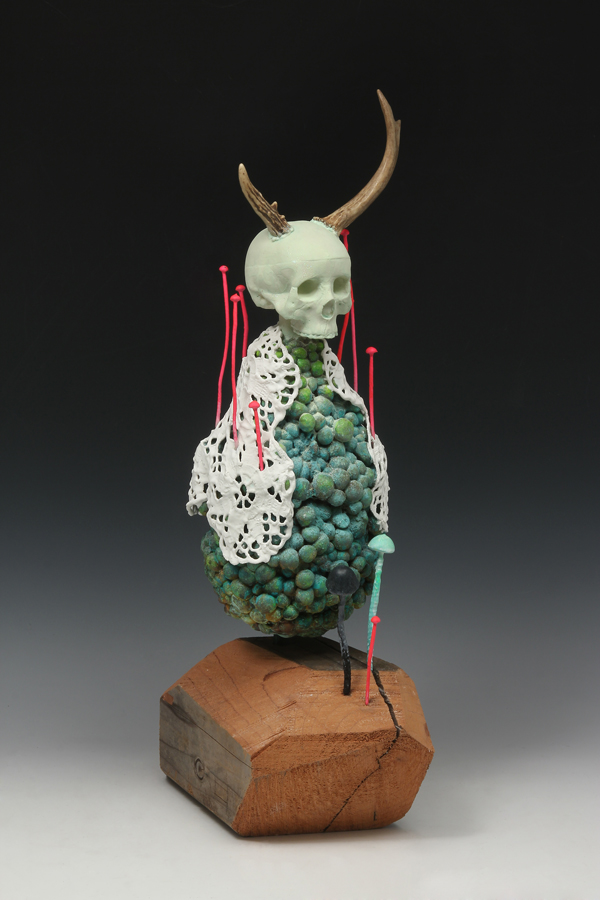 Campfire Gallery is pleased to present “Web of Wyrd” a solo exhibition featuring the work of Bay Area artist Michael Campbell. Web of Wyrd combines the handicraft aesthetic of the hippy movement with folk magic.  Ritual objects, altars, and tools of divination wrapped in fluorescent yarn and covered in mushrooms are fashioned into art forms.  These psychedelic tools serve as vehicles to manipulate reality and change consciousness through magic. Show runs September 26 – November 3, 2013.

“But oh, I was most terrified,” continued the girl, “when I peeped through your window, and saw not you, but a creature with a fiery head.”  “Then you have seen the Witch in her proper dress,” said the old woman.  “For you I have long waited, and now you shall give me light.”  So saying, she changed the girl into a block of wood, and then threw it into the fire; and when it was fully alight she sat down on the hearth, warmed herself, and said, “Ah, now for once it burns brightly!”

The tradition of magic pervades the lives of children.  Folklore and fables teach cautionary tales of the dangers of witchcraft and enchantment. To make a wish and blow out one’s birthday candles is to practice a type of candle magic.  But as children grow into adults, magic is forgotten.

I select materials for their mystic properties.  The eyes from dolls open and stare from tree branches suggesting a spirit within.  Human bones are molded and recast into stone.  Glitter, sulphur, myrrh, and herbs are dusted over surfaces in order to ‘wake’ sleeping objects.  Grave dirt and candle wax are sealed in blue canning jars used as spirit vessels.   Here, to make art and to practice ‘the arts’ are one and the same.

Michael Campbell grew up in the Midwest in the 1970’s amid the handicraft movement with a home full of macramé, decoupage, and papier-mâché.  1600 miles away from Haight-Ashbury, he made God’s eyes in cub scouts and glued macaroni onto wooden crosses in bible school.  From an early age, handcrafted objects and the divine were connected.

Campbell received his B.F.A. in Painting from Kansas State University and M.F.A in Sculpture from the University of Arizona. He has exhibited extensively both nationally and internationally. He currently lives and works in the Bay Area.