Campfire Gallery is pleased to present DIMA/DUSER featuring new paintings by Dimitri “Dima” Drjuchin and Ryan Stubbs aka Duser. This show brings together two artists whose work is influenced by their background in illustration, graphic design and street art. Each artist draws upon a personal iconography and distinctive color palette to create a world full of characters that are uniquely their own. Dima’s canvases are overflowing with complex dialogues between superheroes and villains in which the balance of power is unclear. Duser’s world emerges through a series of portraits where the subjects and their individual personalities become the central theme. 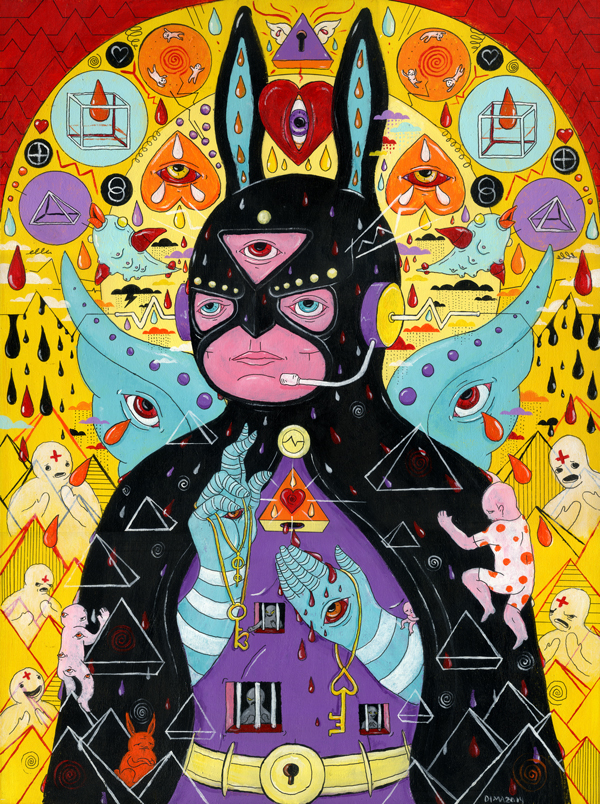 Personal artwork is about self-discovery and evolution. What I love about it is that I get to interpret my experiences and look back at them through the images I created. I always see making art as a conversation with yourself with your own language that only you speak fluently. It’s my form of meditation. It helps me be a more creative thinker in other aspects of life. It has shaped my whole world. I use a lot of simple shapes and repeated themes in my work, namely pyramids, stars, hearts, skulls, angels, superheroes and animals. I enjoy playing with familiar shapes and themes and turning them into something of my own, tackling them and making them into something you wouldn’t expect. I have complete freedom to do whatever I want. I can go as weird as I feel. I can create good guys, bad guys, or bad guys that are secretly good. Things don’t have to make sense. They don’t have to mean anything, they can mean everything! I can plan things out, or I can just wing it and see where it goes. THERE ARE NO RULES! It’s more fun that way because I get excited about the outcome as the maker and the observer. There’s also something to be said about the powerful sense of satisfaction when you start a project and finishing it. That’s a dragon worth chasing.

Dimitri Drjuchin is an artist/musician who was born in Moscow, but grew up making images and sounds in New York City. He graduated from Parsons School of Design in 2003 with a BFA in Illustration. His work has been exhibited nationally including galleries in Brooklyn, Los Angeles, San Francisco and Cleveland. He has designed album covers for Father John Misty, Reggie Watts and Marc Maron. This is his second show at Campfire Gallery. 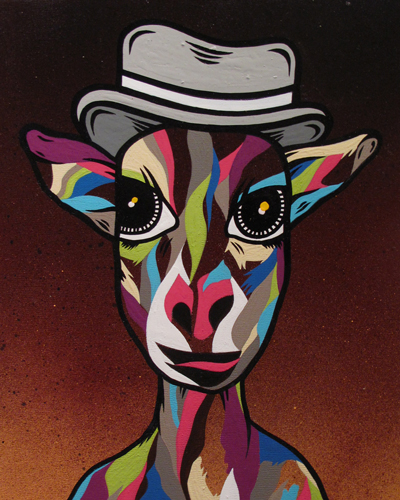 Ryan Stubbs is a San Francisco based artist heavily influenced by the worlds of graffiti, street art, illustration and design. His most recent body of work is a collection of small and medium sized pieces on wood and canvas. His use of aerosol, latex and enamel creates a vibrancy and depth that explodes on the surface. Though Duser’s signature line work is ever present, it is clear that new directions and growth are taking place. The smaller work delves into a use of symmetry not previously seen as well as an expanded color palette. The imagery suggests a lighter, more playful mood. The medium sized work also sees a broadened color palette as well as a new approach to foreground and background and their relationship to the image. This approach works very well with the content which weighs heavily in the narrative. Duser’s focus on the Human Condition shows an interesting dichotomy between reality and a cosmic dream-based existence.

Visual art has been a long-standing passion for Duser. While active in the graffiti world, he attended Whittier College on an art scholarship, followed by a MA program at NYU and a Post Baccalaureate program at the San Francisco Art Institute. Upon completion at SFAI, Duser realized the true beauty of San Francisco. He set up a home base and studio where he continues to work. His work can be seen in many major cities through out the US, Canada, Mexico and Europe. From outdoor murals to cafe’s, restaurants, nightclubs, galleries and the odd museum appearance.