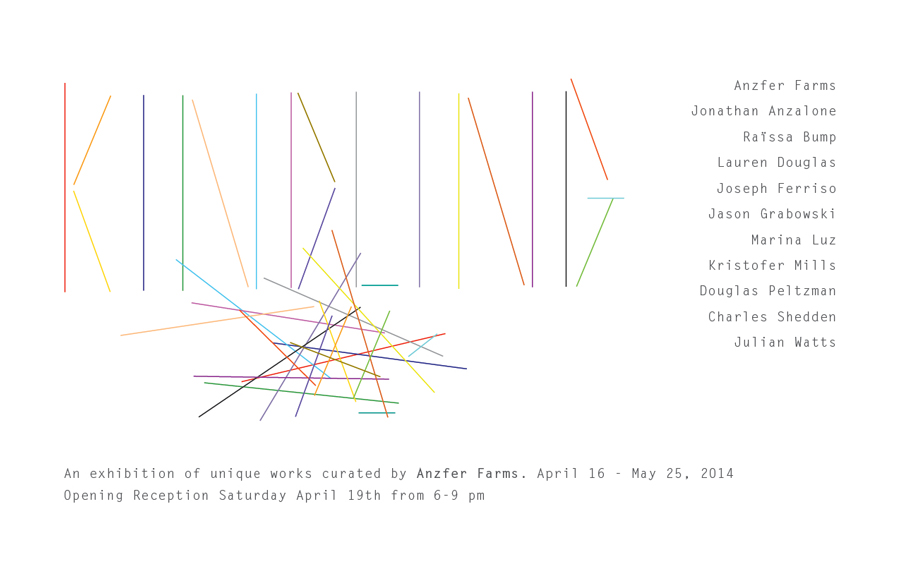 We are pleased to announce our first show curated by local design team and artists Jonathan Anzalone and Joseph Ferriso of Anzfer Farms. Their furniture designs and installations have become a recognizable part of the San Francisco landscape and reflect the modern and natural spirit of the Bay Area. This show brings together their collaborative designs, individual art work and artists whose work shares a common language.

“Kindling” is an exhibition of works which frame a cross section of artists that are in dialogue with Anzfer Farms. Living near and participating in the bonfires at Ocean Beach is an inspiring part of living in San Francisco. An ongoing aside while making the art, furniture and lighting is that “it can always, at the very least, be good kindling.”

In this lighthearted spirit we will be exhibiting some pieces by wildly talented artists that you would never actually want to burn. All of the artists exhibited in “Kindling” are sources of inspiration for Anzfer Farms output.

It is exciting to gather pieces from each of these individuals and put them all in close proximity; to frame a moment that transcends “functional” and “non-functional” while merging shop/gallery concerns and boiling down to – is it worth living with? Hopefully the answer is “yes”, but if not it can always make good “Kindling”

ABOUT
Anzfer Farms is a San Francisco art and design studio founded in 2009 by Jonathan Anzalone and Joseph Ferriso. Working primarily with reclaimed materials they create furniture, lighting, art and installations that are often colorful, whimsical and inventive.

Jonathan Anzalone was born on Long Island, studied painting at the Rhode Island School of Design and graduated in 2003. After six years of woodworking that supported an art making habit, Anzfer Farms was founded as an effort to expand the creative process to a full time position. Jon’s personal studio work is often born from the off-cuts of daily labor. From the discard, he finds meditations on beauty, color and proportion.

Joseph Ferriso grew up one mile from Jon and received his BFA from Cooper Union in 2003. He worked as a fine art framer and installer in NYC before moving to SF in 2009. Once reconnected with Jon, he was inspired to start Anzfer Farms. His paintings seek to open a dialogue of visual engagement with the viewer. The paintings often challenge color relationships, perspective and fidelity in relation to the illusions they portray.

Raïssa Bump is an artist from the Hudson Valley of NY who is currently working in the San Francisco. She received her BFA from Rhode Island School of Design in 2003. Since graduation she has had her own studio making jewelry and knitwear and views her studio practice as one of collaboration, joining materials and techniques of the clothing and jewelry she is making. Raïssa’s work is fueled by a direct, tactile response to the contrasting materials of metal and fiber, loving them each for their unique qualities such as strength, flexibility, or color.

Lauren Douglas was born in Carson City, Nevada. She received her MFA at Mills College in 2013 and her BA from San Francisco State University in 2005. Her work has been exhibited in the Bay Area at The Battery, Adobe Backroom Gallery, SF Cameraworks, Hatch Gallery, Backstock Gallery and Interface Gallery and in Los Angeles at Shoshana Wayne Gallery.

Jason Grabowski lives and works in Manhattan. His work is rooted in notebooks that he draws and writes in throughout the day, which serve as the ore for his studio practice made up of mixed-media drawings and paintings. Jay has exhibited in the US and abroad and is co-founder of PUSH Press and the Heliopolis Project, a storefront in Brooklyn dedicated to experimental art and literature. He also serves as art editor for Big Bell, an annual poetry magazine.

Kristofer Mills attended the University of Granada in Spain and the University of Georgia Studies Abroad Program in Cortona, Italy before receiving his B.A. in Studio Art from the College of Charleston. In 2003, he co-founded Redux.Contemporary Art Center, a non-profit arts organization in Charleston, SC. He is currently the creative director of AUT / AUT Projects.

Doug Peltzman is a full time studio potter in the Hudson Valley area of New York. After several formative years studying painting, Doug came to earn his Bachelor of Fine Arts in Ceramics at SUNY New Paltz in 2005. In 2010, he received his Master of Fine Arts degree in Ceramics from Penn State. The detailed handwork in his pieces serve as a conduit to heighten one’s perception and sensitivity about what a pot can be.

Julian Watts is an artist and designer currently living and working in his hometown of San Francisco, CA. His furniture and hand carved wooden utensils blur the line between sculpture and functionality to create poetic and unexpected objects.