Campfire Gallery is pleased to present Night Vision, a group show featuring new work by Maxfield Bala, Michael Campbell, Matthew Dutton and Zoë Williams.  The wildly imaginative work of these four artists draws inspiration from the world of darkness and its inhabitants ranging from the real to the fantastic. If you have ever walked in complete darkness, you know how disorientating it can be.  Without light and sight to guide us, our perception of our surroundings is altered dramatically allowing imagination to take hold. It can be disturbing, frightening but also exhilarating and liberating. The mind is open to what we cannot see, allowing us to explore deeper layers of consciousness. This show illuminates the dark arts of these creative talents and lets the viewer draw their own conclusions about what’s beautiful, bizarre and truly scary. Welcome to Night Vision. 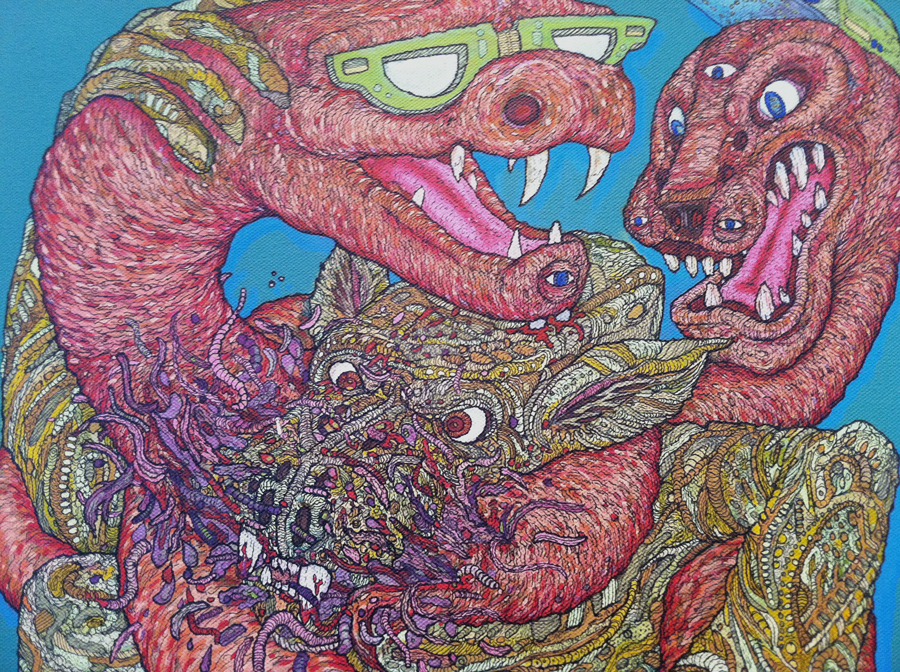 Maxfield Bala is a twenty year old fine artist and illustrator from the San Francisco bay area. Bala’s unique artistic style and content derives from a self-taught background concentrated on personified objects, wacky inventions and bizarre characters. Artistic mediums normally include, but are not limited to aerosol paints, acrylic paints, and ink. Bala’s artwork has been recently featured in numerous gallery exhibits, Zox straps, X-Games and the Coachella Music and Arts Festival. He also participated in live painting demos at Miami Art Basel 2013. 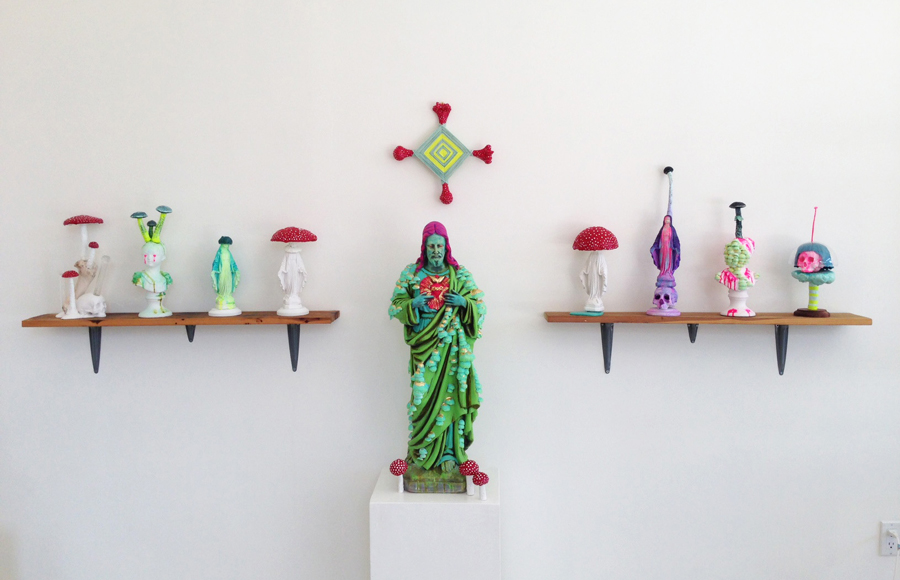 Michael Campbell grew up in the Midwest in the 1970’s amid the handicraft movement with a home full of macramé, decoupage, and papier-mâché. 1,600 miles away from Haight-Ashbury, he made God’s eyes in Cub Scouts and glued macaroni onto wooden crosses in Sunday School. From an early age, handcrafted objects and the divine were connected.

Campbell’s art explores mushrooms in both their natural role as ‘decomposers’ of dead, organic matter and as symbols of fairytales and altered states of consciousness. The bold red and white spotted caps of the immediately identifiable amanita muscaria are the iconic symbols of both vintage Christmas gnomes and of Siberian Shamans engaged in vision quests. Campbell references the depiction of these mushrooms here as the forbidden fruit in the Christian fresco found in the Plaincourault Abbey.

Campbell’s sculpture speaks in a visual language unique to the 1970’s through bright colors and painted plaster casts reminiscent of chalkware banks of that era. They suggest hand painted, mass-produced tchotchkes of divine sacraments, mushroom saints, and forest spirits. 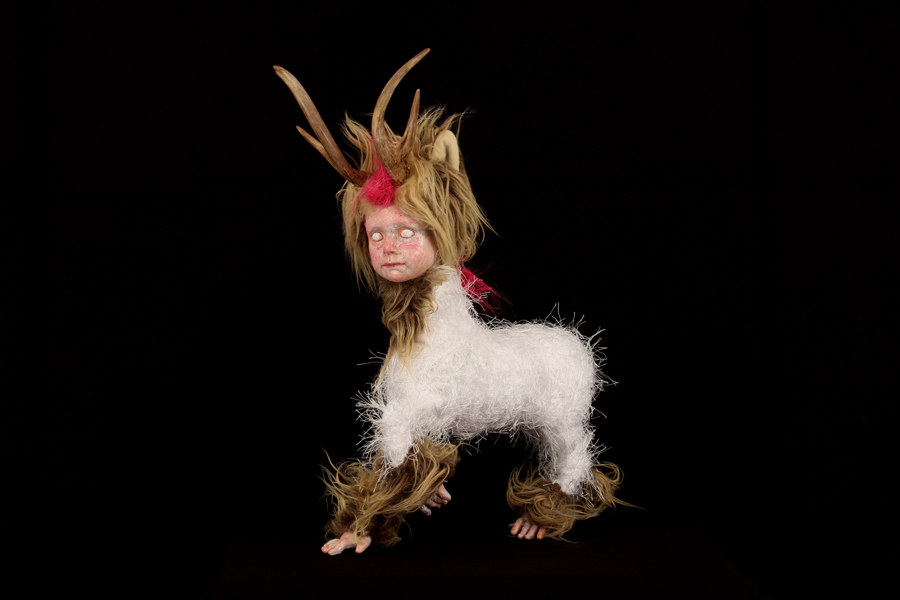 Matthew Dutton was born in Winter Park Florida and now resides in Chattanooga Tennessee.  Outside of his studio practice, Dutton works as the Art Specialist at Rock City Gardens; an enchanted theme park full of natural beauty and sculptural wonders.  He is a graduate from the University of Tennessee at Chattanooga with a BFA in 3D Sculpture.

His personal artwork includes both painting and sculptural techniques.  Currently, Dutton is working on a grouping of interesting sculptural creatures that embody a simultaneous sense of attraction and repulsion.  These sculptures conjure emotions playing on morbid curiosity and have influences from such artists as Patricia Piccinni, Ron Pippin, and Elizabeth Mcgrath.  The animal – human hybrid ‘Phigments’ are dreamlike creatures that inhabit domestic vignettes and are often presented interacting in juxtaposition with familiar objects one might find in their own home. Consolidating the paradox of opposites is also a theme found in his recent work.

As the Art Specialist at Rock City, Dutton builds large scale props that help aesthetically tie the park together for different special events held at Rock City throughout the year.  He builds gnomes for different areas of the park as well as restores and rebuilds antique gnomes and fairy tale characters for the parks vignettes. 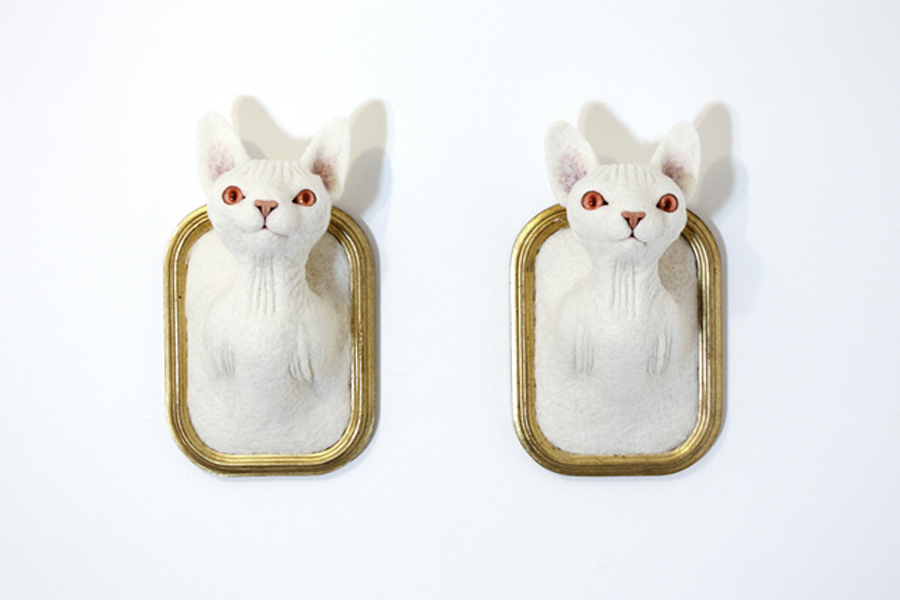 “Symbolize whatever grand or gracious thing he will by whiteness, no man can deny that in its profoundest idealized significance it calls up a peculiar apparition to the soul.”

Spirits, sacred creatures, and phantoms from the dream world inhabit my work. They are the intermediaries that connect us with the (inner) realm of the collective unconscious and the (outer) kingdom of nature.