Campfire Gallery is pleased to present BLUE SKIES, an exhibition of new work by Felicia Gabaldon and Larissa Grant. Gabaldon and Grant individually explore the inextricable relationship between humans and nature as a continuing theme in their new series of paintings. Please join us in celebrating the opening of the show with a reception for the artists on Saturday, June 13, 7-10 pm. 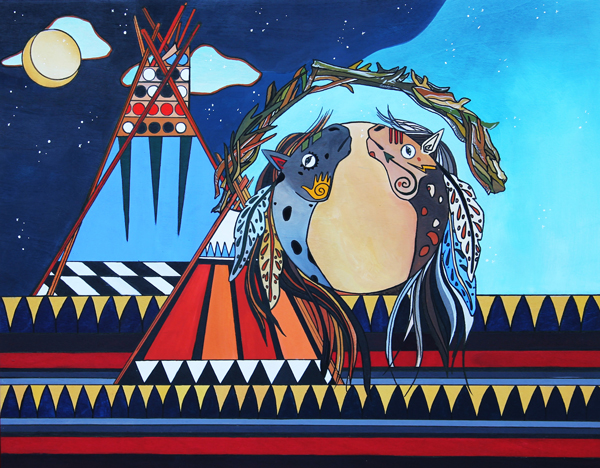 Felicia Gabaldon, Iconic Visions
“Iconic Visions” are a series of paintings that manifest a nostalgic illustration of the natural beauty of the American southwest, while also re-examining it. These paintings begin to narrate Felicia Gabaldon’s story of her identity as an American Indian with both Spanish and Mexican heritage. Also informed by similar influences of the desert landscape from basic stereotypes and the formulaic constructs of typical representations of the region to utopian visions and romanticized beliefs. They represent the distant reverence of self-discovery, culture, and historical elements.

Gabaldon’s work draws from the imagination both a mythical and mystic part of human experience in the natural world. Her work being experienced through a cultural, iconic, and folkloric content expresses the wonders of nature realized through symbols and tradition. She hopes to suggest that the production of space and human experience influence the formation of individual and communal systems of belief.

Gabaldon is from Santa Fe, NM. She currently resides in Berkeley, CA and is a resident artist at Faultline Artspace in Oakland, CA. 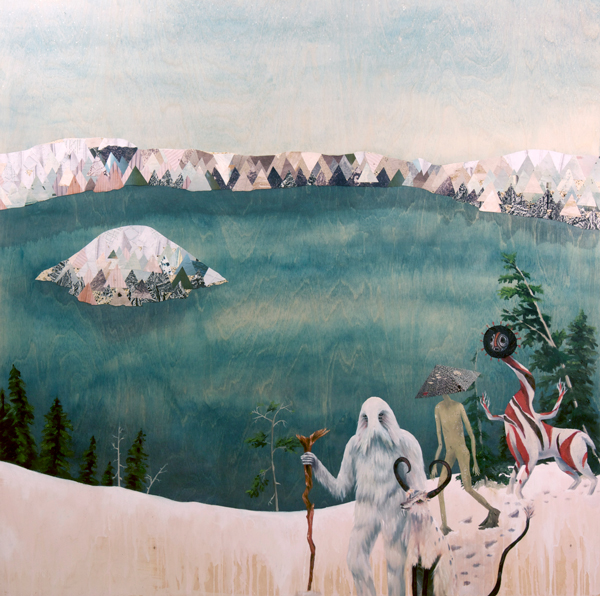 Larissa Grant, Summit To Wizard Island
Larissa Grant is a mixed technique painter who finds inspiration from the natural world. The intelligent and specialized creatures that have adapted and survived in a world overwhelmed by human population growth, continue to be the subjects at the forefront of her work. Using watercolor, acrylic, and oil paints along with ink, and collage she pushes her work to the edge of reality creating the feeling of standing in the middle of a world far from paved roads.

Her latest series, Summit to Wizard Island, moves away from a naturalistic grounding that is found in her previous work and explores imaginative subject matter. The series creates a world in which a group of mythical beasts come together on a quest. The story thread that is found in this selection of work is deliberately vague. The viewer is invited to be involved in inventing the personality and the purpose of the creatures’ journey. Some creatures were born through doodles and have been living in her sketchbook for years, finally given an atmosphere to inhabit. Others were inspired by friends and collaborative efforts through the cognitive drawing game “exquisite corpse.”