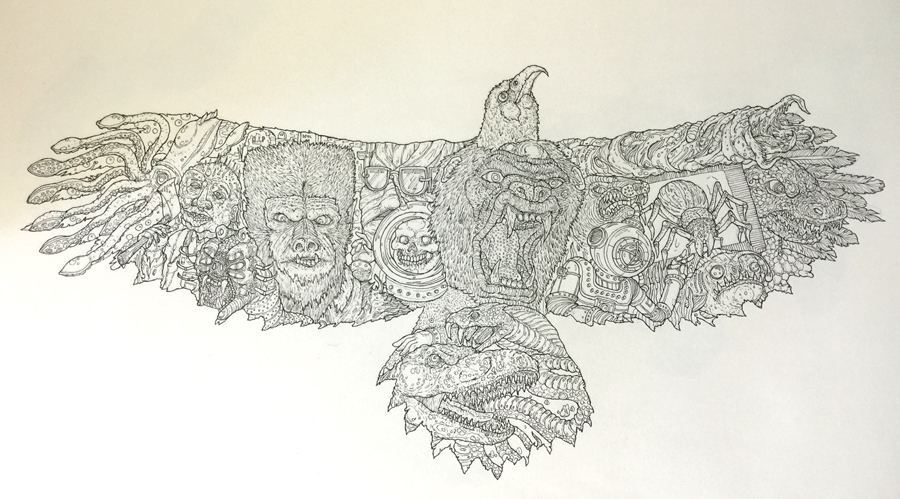 Campfire Gallery is pleased to present “Illicit Imagination” a solo exhibition of new work by Maxfield Bala. The exhibit will include paintings on canvas and black and white ink drawings on paper.

Bala’s work is character driven and features fantastic creatures drawn from his imagination. He is known for his highly detailed style and intricate line work that allows him to unlock his thought process, weaving a multitude of ideas into new monstrous forms. The central subjects of his canvases are chimeras, figments that combine the familiar and the unreal to create something never seen before. He is interested in images that break rules, explore the bizarre and express something unexpected, to help breakdown barriers between what’s visible and what’s possible.

Maxfield Bala is a multi-disciplinary artist from the San Francisco Bay Area. He specializes in illustration, painting, graphic design, large-scale murals and branding. Bala has exhibited in galleries throughout the United States including Miami, San Francisco, Los Angeles, Sonoma County and Portland, Oregon. He has also partnered with Zox Brand, Lagunitas Brewing Company, Global Inheritance, X-Games and the Coachella Music and Arts Festival. This is his second exhibit at Campfire Gallery and his first solo show in San Francisco.