Campfire Gallery is pleased to present “Night and Day” an exhibition of work by Andrew Macrae and Eric Petersen. The exhibition will include original watercolor and gouache paintings on paper by Macrae and archival fine art prints in singles and multiples by Petersen. Show runs September 9–October 3, 2015 with an opening reception on Saturday, September 12, 7-10 p.m.

Night and day is often used to express the idea of polar opposites, and the same can be said when looking at the style and subject matter of the work by Macrae and Petersen. Working in watercolor and gouache, Macrae paints surreal landscapes in which plant and animal life are tightly intertwined with abstract elements and repeating patterns. The work is highly detailed, layering vivid imagery that creates a sense of struggle and chaos. There is mystery in the undecided outcome.

In contrast, Petersen is known for his stripped-down illustrative style. His subject matter consists of unearthly people in simple geometric environments and explores ideas that combine a strong graphic style with an ambiguous story. There is an intentional stillness in these vignettes and the mystery comes from the details that are left out of the work.

Where they share common ground is their use of vibrant color and techniques that explore space and dimension that lend both mood and drama to the work. Light plays an important role, whether it’s bright blue skies, moonlit nights, or long shadows, helping to place the viewer in the physical place and connecting them to the subject matter. Macrae layers different media to push background and foreground elements and Petersen uses 3D and illustration software to create the dramatic angles characteristic of his work. 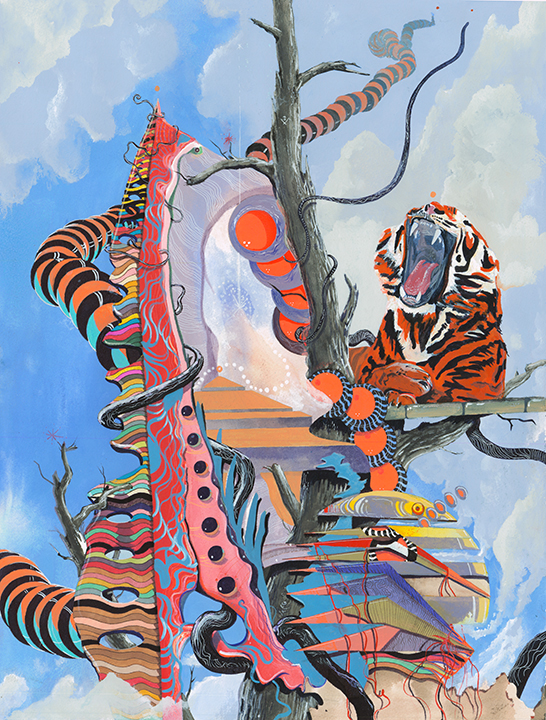 Andrew Macrae, “Afternoon In The Garden of Paradise”, watercolor and gouache on paper, 18×24 inches

I am interested in working through an image whilst in the process of painting on a surface. The first objects of the image are scenes from nature: trees, mountains and animals. The scene slowly fills with solid shapes and perfect lines; objects of human conception. I am showing the act of contemplation as man slowly imparts his development over and around the established nature. What remains in the end is an image exhibiting tension between man and nature, a scene where the two are wrapped up in a chaotic commotion.

I use a broad array of mediums to create a painting, but I prefer watercolor and gouache on paper. In my paintings, watercolor is used to create faded landscapes, while gouache is used as the foreground medium, so I can push line and color. When combined, my images become vibrant displays of graphic subjects existing in a dream state.

About the artist: Macrae’s work has been shown throughout the continental United States from California to New York. He earned a degree in Studio Art from Humboldt State University with an emphasis in painting, most notably in the medium of watercolor on paper. He currently lives and works in Oakland, California. 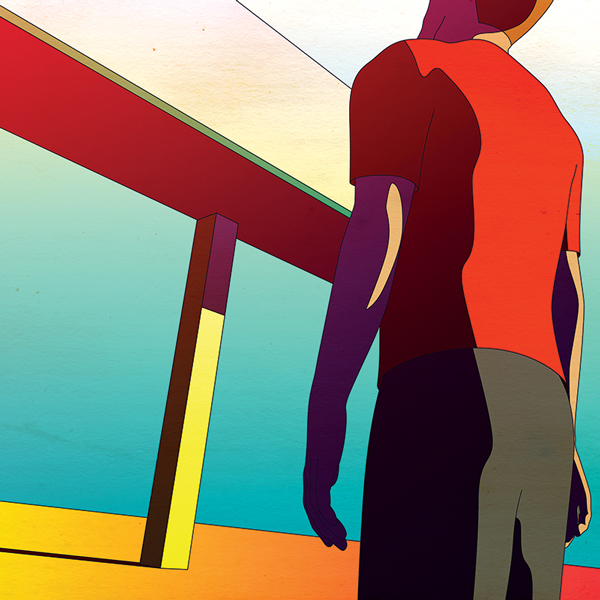 My style is influenced by instructional graphics, video games and the look of vintage comics of the 1940s. I draw uniform lines on a computer to strip away some of the human element and expressive quality seen in non-digital work. I use perspective and unnatural colors to set up a voyeuristic feeling and create an unsettling mood. I am interested in the combination of a purely functional illustration style with an emotional scene.

My subject matter typically consists of people and simple environments. I aim to create a sense of ambiguity and allow the viewer to imagine their own narrative.

About the artist: Petersen has been featured on Juxtapoz, Hi-Fructose and is a member of the NYC Society of Illustrators. His illustrations have appeared in numerous publications including The Guardian, Fortune Magazine, BuzzFeed News and The New York Times Sunday edition. He currently lives and works in Fallbrook, California.