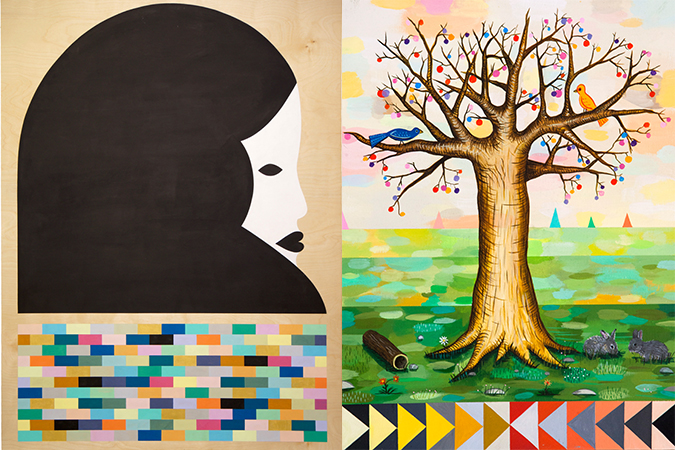 Campfire Gallery is pleased to present ONE DAY AT A TIME, an exhibition of new paintings and mixed media work by David Marc Grant and Adrian Landon Brooks. The work by both of these artists is influenced by the notion of time – past, present and future. Grant continues to explore the idea of a mythical future world in his series of acrylic paintings on wood panel. His landscapes combine plants, animals, primitive structures and geometric patterns that suggest regrowth and rebuilding. In contrast, Brooks is inspired by materials and aesthetics of past eras. His stripped-down, minimalist forms are influenced by folk art and the simpler, hand-rendered illustrations and graphics that precede digital production. He often repurposes found materials for his canvases, which create a feeling of history with each piece. His works will include paintings on wood and a selection from his “Warpaint” series of paintings and drawings on antique cabinet cards. 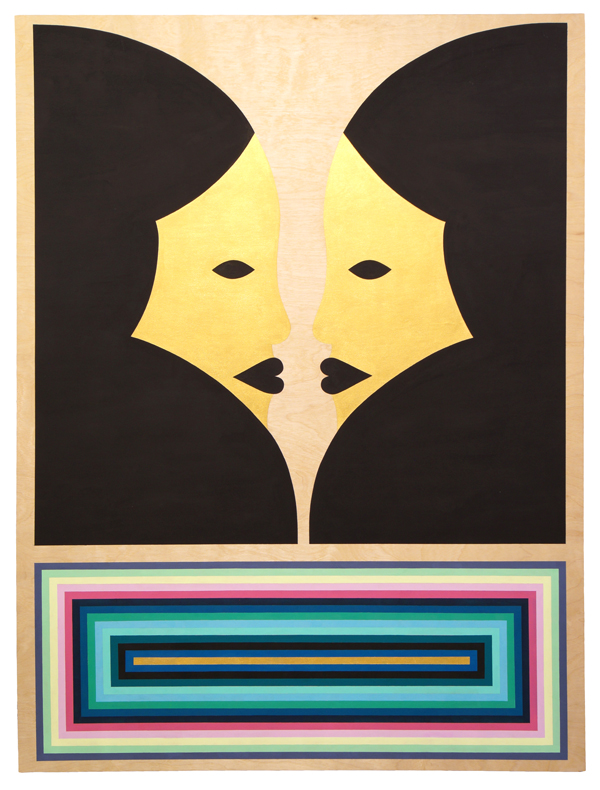 I have always been drawn to a past era, imagery that reflects a simpler time. I grew up rummaging through my grandparents’ garage in Houston looking for old oil cans, paint buckets, and catalogs. The artifacts I found there showed detail and style that has long been replaced by digital imitations. The flat logos on rusty cans and illustrations in men’s 1950’s catalogs served as perfect test subjects for learning how to draw a simple image.

In many ways, I am still creating the same simple and effective images I made when I was a kid. Traditional folk art has been the primary focus for most of my adult life. The emphasis on a single bold line or minimal color pallet continues to serve as a constant challenge. When I strip a painting down to its bare bones it helps me think more intently about the impact of each line or stroke. I find satisfaction in creating simple and concise works that convey universal messages of loss, love and redemption.

A mixture of mediums and techniques are used to achieve my vision; most recently I’ve been focusing on gouache and pen illustrations on paper or wood. I am most comfortable with pen illustration. In recent years, this has primarily been reflected in my warpaint series, which consists of antique cabinet photos that I’ve drawn and painted over. To me, this series is a revitalization of the past and a celebration of timeless beauty. The images may vary but a core elemental style remains consistent. I will generally focus on a central figure that is often floating in a blank space or with a minimal background.

I am drawn to sacred art of all kinds, especially art that emphasizes a “savior.” Finding my creative voice brought freedom and redemption from everything that ails me. When I am creating work, the outside world is on pause and I can completely let go of all the trials and tribulations of the day. I feel that this is represented in the iconic images I create and is my attempt at paying homage to something greater than myself.

Adrian Landon Brooks was born in Houston, Texas, in 1983. Brooks works predominantly in the mediums of painting and illustration, using found materials such as wood, metal, and photos as his canvas. He studied painting at the San Francisco Art Institute and served an internship at the McClain Gallery in Houston. He has had solo shows in Denver, Chicago, Austin, Houston, San Francisco, and San Antonio. He has also been included in museum exhibitions at AMOA and FWMOA. He currently lives and works in the hill country outside of Austin. 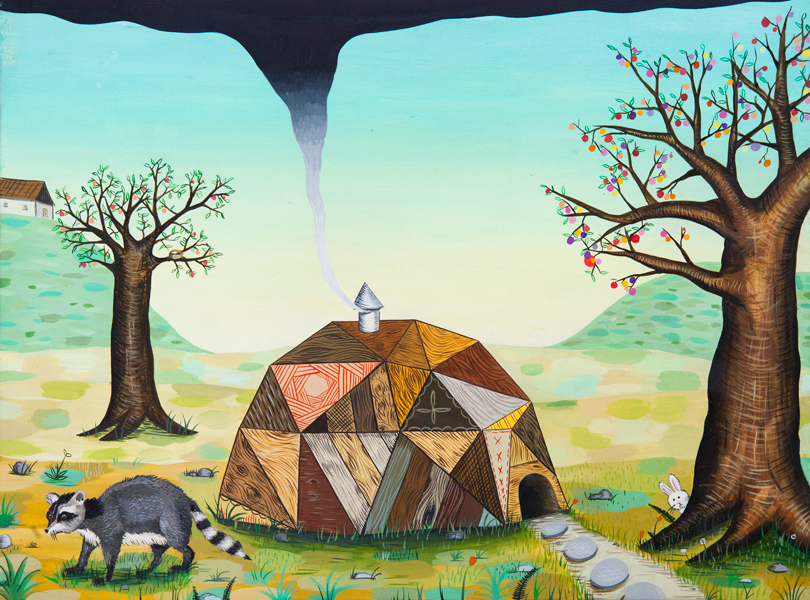 The work for this show continues the project of fictitious world building through small-scale acrylic paintings. The world depicted is one of magical future-folk landscapes and the flora and fauna that populate them. Also present are various structures of unknown origin that suggest a post-collapse civilization that has returned to nature but of an unknown temporality. They could exist in the past, present, or future, possibly all at the same time.

My formative exposures to the genres of dystopian/utopian science fiction and fantasy genre films and other media and their emphasis on presenting awesome spectacle as well as cautionary tales of environmental disaster and the end of the world are the impetus for my work. As are my coequal hopeful and fearful wishes that we might return to a more balanced and harmonious existence after this current civilization has run it’s inevitable course. The goal of this world building is the creation of a narrative myth involving sparse landscapes, trees, icebergs, animals, and colorful geometric structures comprised of primitive building materials.

But what story they are telling is only revealed to me through the completion of each subsequent work. The process of completing each glimpse into this world compels and informs more work to be completed in order to see what other wonders and magic might exist there. Because of the exploratory nature of this process, the work asks for the viewer to imagine their own narrative and interaction with the world that is being presented to them.

David Marc Grant lives and works in his hometown of San Francisco. He received his BFA and MFA from the San Francisco Art Institute where he has also been a guest lecturer and teaching assistant. He has exhibited extensively in the Bay Area as well as nationally in both solo and group shows.