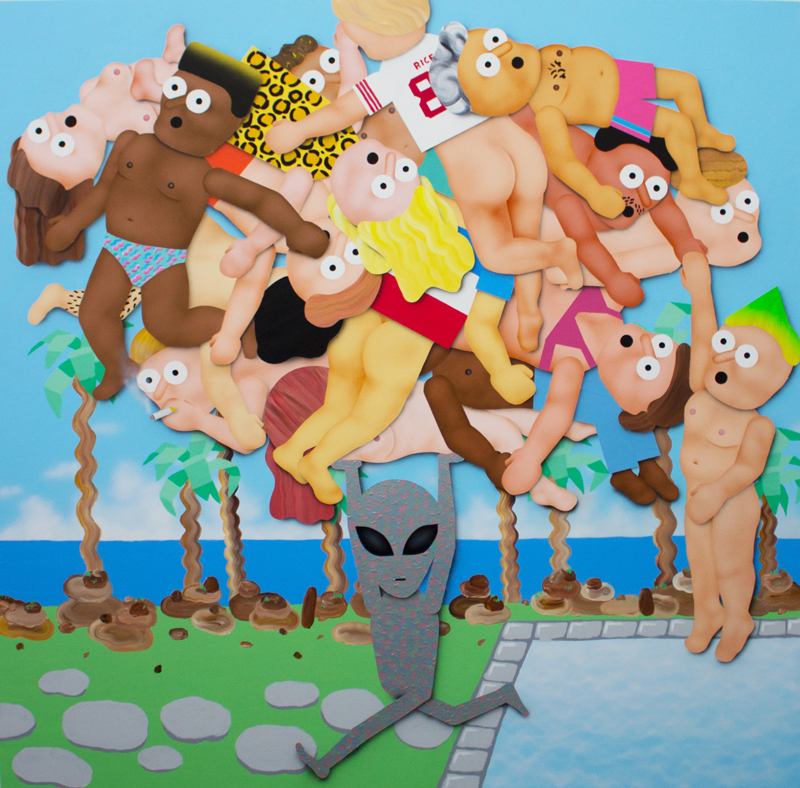 Campfire Gallery is pleased to present “Pool Crashers,” a two-artist show featuring new paintings by Sean-McGee Phetsarath and Aaron Rivera. The work by these artists embodies the spirit of summer, a time to let go and break away from the normal rules. Unabashedly naughty and indulgent, the work challenges expected behavior and explores themes of desire and gratification in a light-hearted and playful way. Each artist brings a strong graphic quality to his painting style. Phetsarath draws on animation and pop culture references to create scenes that are part memory and part alternative reality. Rivera’s small-scale paintings reflect his background in illustration and feature his imagined creatures acting out graceful scenes that play with the idea of fetishism. 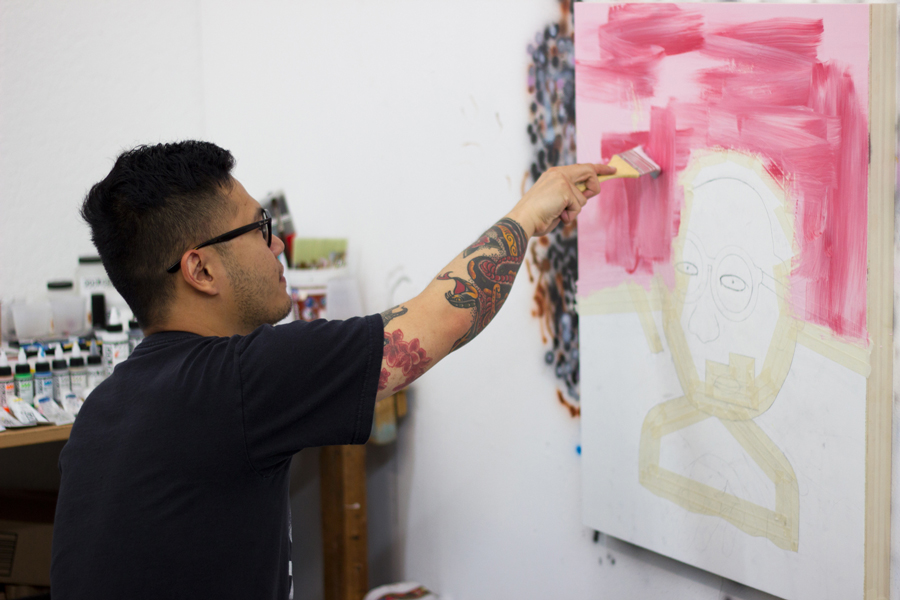 Being an anxious and spooky child usually translates to unnatural tendencies as an adult. These behaviors are my attempt to capture what made nostalgic entertainment such an effective alternative to conventional reality. My paintings appropriate both iconic and atypical pop-culture imagery, and combine them with eccentric personal anecdotes in order to create a world where satisfaction lies in nonsense. Mature themes are reinforced by the Saturday morning cartoons that helped shape these perverse thoughts. Will I be able to embrace the levity produced by this absurdity, or will my very existence become contaminated by it?

Sean-McGee Phetsarath is a 2017 MFA candidate at the San Francisco Art Institute. He has exhibited nationally in both solo and group shows since 2012 including Steven Zevitas Gallery, Boston, MA, Thierry Goldberg Gallery, New York, NY, the Contemporary Art Museum, St. Louis, MO and stARTup Art Fair, Los Angeles, CA. He was selected as a noteworthy artist in New American Paintings, No. 120, 2015 and his work was featured on the cover. He currently lives and works in San Francisco, CA. 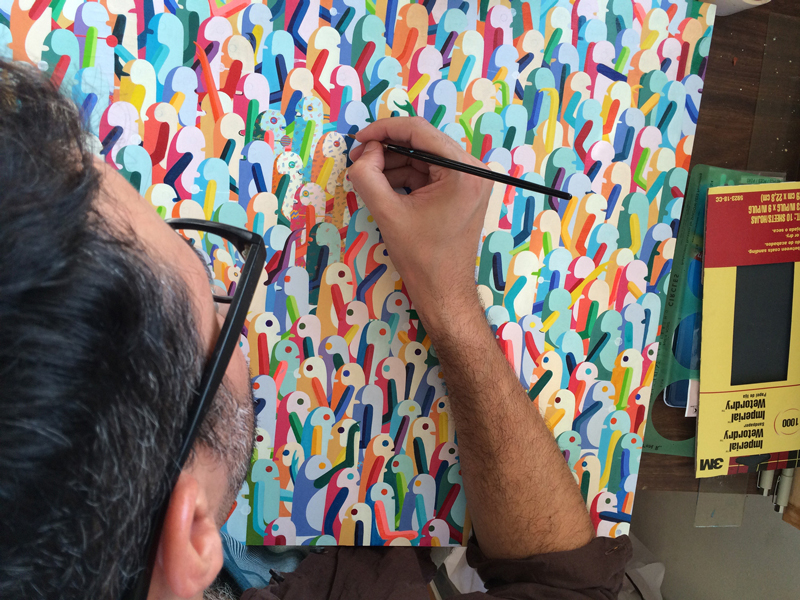 Forget about your beach body, don’t worry about the carbs, summer is all about indulgence. Continuing on the themes of leisure and luxury, this latest body of work explores the sensuality and seduction surrounding food. Using all our favorite tasty treats shrouded in color and euphemism, these paintings take a cheeky look at the way we fetishize our food. A stylistic continuation of 2014’s Leisure series, The Food Paintings, incorporate Rivera’s always hedonistic creatures with an embrace of summer, and a love of color and pattern.

Aaron Rivera is mixed-media artist who has been working in illustration, small-scale paintings, and murals since his teens. More recent work includes the fabrication of puppets for stop motion films by Henry Selick (Shadow King) and Charlie Kaufman (Anomalisa). Aaron has also worked on the children’s program TumbleLeaf for Bix Pix and Amazon, and several commercials for studios such as Shadow Machine and Pet Gorilla. He has commissioned work for the UBC Mural Company of Chicago and, LA Metro. He has also done illustrations for the web series Cost of Living and Croissant Man. Rivera has shown work in the Discarded to Divine Charity Art Show at the De Young Museum, and participated in events at Los Angeles Municipal Art Galleries and La Luz de Jesus Gallery where he currently has work on display. He holds a BA in Industrial Arts from San Francisco State University and currently resides in the Silver Lake area of Los Angeles with his partner Dave and their fat cat.